The blue men of the Sahara

While the Sahara’s captivating blue attire is becoming a relic from the past, in Mauritania, the fashion tradition is still alive and looks like it’s here to stay.

The Saharan daraa or boubou, a long and loose gown, and tagelmusts, a cloth veil that is used as a turban, are two key clothing staples for the traditionally nomadic men of the Sahara. 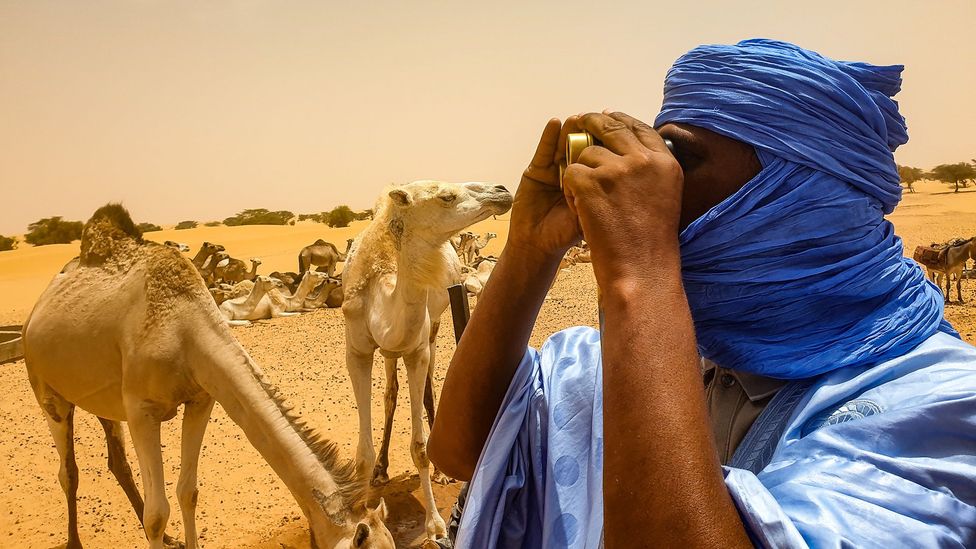 The garments’ northern African origins can be traced back hundreds of years, as far as the 7th and 8th Centuries, to the early times of the trans-Saharan trade between Sub-Saharan and North Africa. And while some locals will say the clothing symbolises a shyness and modesty of the people, most agree that its basic function is to protect against the sun, as well as the frequent sandstorms of the region.

Today, with more people settling in larger cities, and fashion styles trending towards those from the West, the attire the Saharan men once wore to traverse the hot desert has largely become a relic from the past. Yet, in Mauritania, where most men wear the daraa and tagelmusts in captivating shades of blue, it’s still alive – and it looks like it’s here to stay for quite some time. 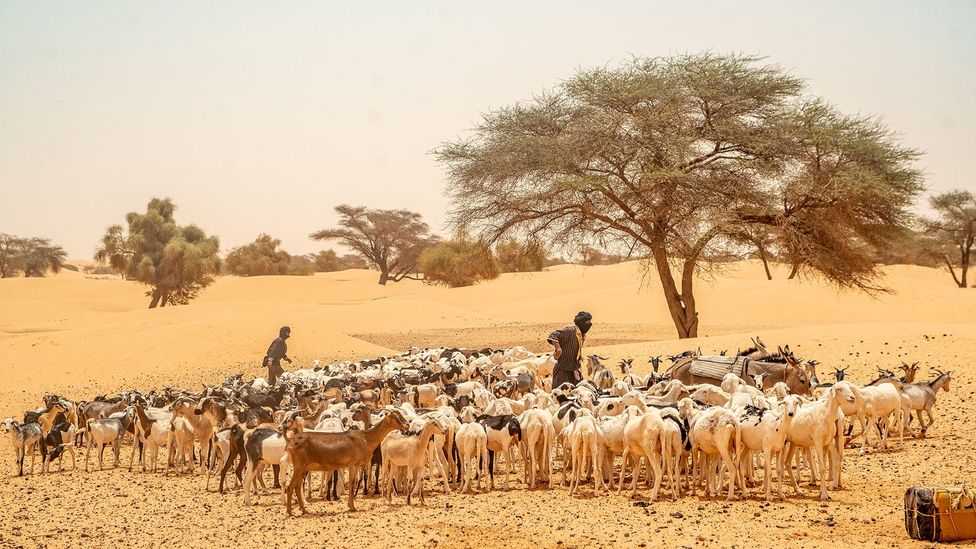 “The style and shape of our daraa not only allows the right airflow in these difficult environments, but also helps the Saharan men to conserve body water in the middle of the desert,” said local Mauritanian guide Dahid Jdeidou (pictured).

During the trans-Saharan trade era, new commerce hubs sprang up on the outskirts of the desert, and various ethnic groups traded in-demand items across North Africa such as spices, minerals, animals and textiles. Over the centuries, the trade brought many different groups into Mauritania – including the nomadic Tuareg from the north-east, the Haratin from the south-east and the Haalpulaar from the south. As these different groups settled alongside the Berbers (known locally as Amazigh), who have lived in Mauritania since the 3rd Century, the Muslim faith and Arabic language prevailed, but new cultural traditions emerged.

Architectural designs evolved, books from around the Sahara made their way into local libraries, and fashion trends from across North Africa merged to make a new style in the form of the long, flowing, wide-sleeved tunic. 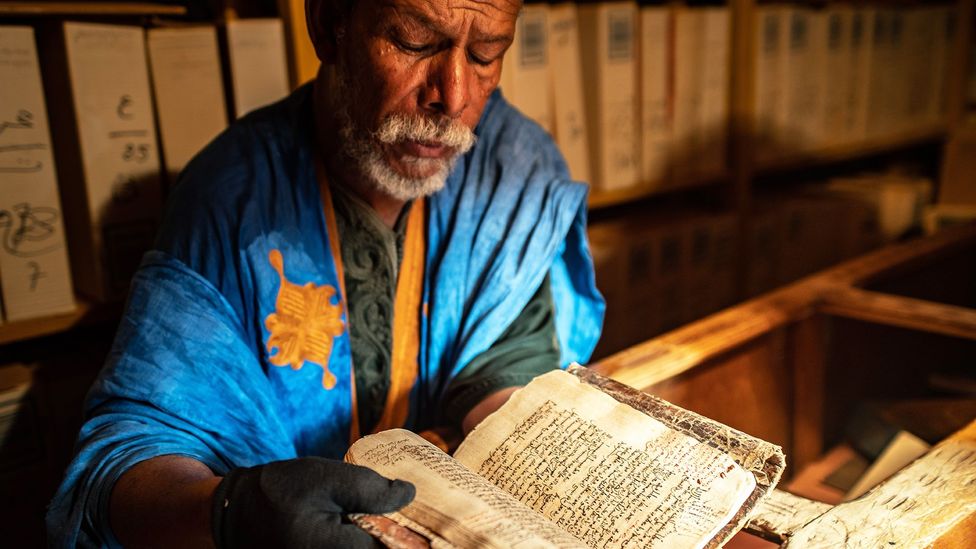 Books from around the Sahara made their way into libraries during the trans-Saharan trade era (Credit: Juan Martinez)

A melting pot of the Sahara

Like other tunic-style clothing such as the kimono from Japan or the kaftan originating in ancient Mesopotamia, the daraa has found a place in fashion history. The first versions of the clothing are thought to have come from the Haalpulaar, who resided along the Senegal River between modern-day Senegal and Mauritania.

Eventually, populations from all social statuses wore daraas, but colours depended on one’s station in life. Wealthy merchants wore chalk-white daraas and tagelmusts, as they could afford to clean their clothes every day, while enslaved people would typically wear black, as they often worked in unclean environments and had to wear the same clothing repeatedly.

With the lack of natural colourful dyes around the Sahara, coloured daraas appeared only after the Haalpulaar started trading natural indigo dye and indigo-dyeing techniques became popular. These dark blue-coloured daraas were perfect for people who couldn’t afford white daraas, but who also didn’t want to wear black ones.

The Tuareg people are considered the “blue men of the Sahara” (Credit: Juan Martinez)

While the Haalpulaar might have established the indigo daraas, it was the Tuareg people who adopted and popularised the fashion, and are considered the “blue men of the Sahara” – a name they eventually got because the colour of their clothing rubbed off onto their skin while being under the hot sun.

According to Dr Anja Fischer, researcher of Saharan studies at the University of Vienna, the influence of the Haalpulaar could have led to big changes for Tuareg fashion. “Tuareg people used to wear leather clothes, and at some point, they switched to the blue fabrics they are mostly known for today.”

The Tuareg, who now inhabit a vast area stretching from Libya to Algeria, Niger, Mali and Burkina Faso, were traditionally one of the largest populations of nomads in the Sahara and were influential in the spreading of Islam in Africa. They were known across the Sahara, and the fashion style they adopted in Mauritania became recognised across North Africa, and later around the world. To this day, their fashion styles express their nomadic culture and traditions. 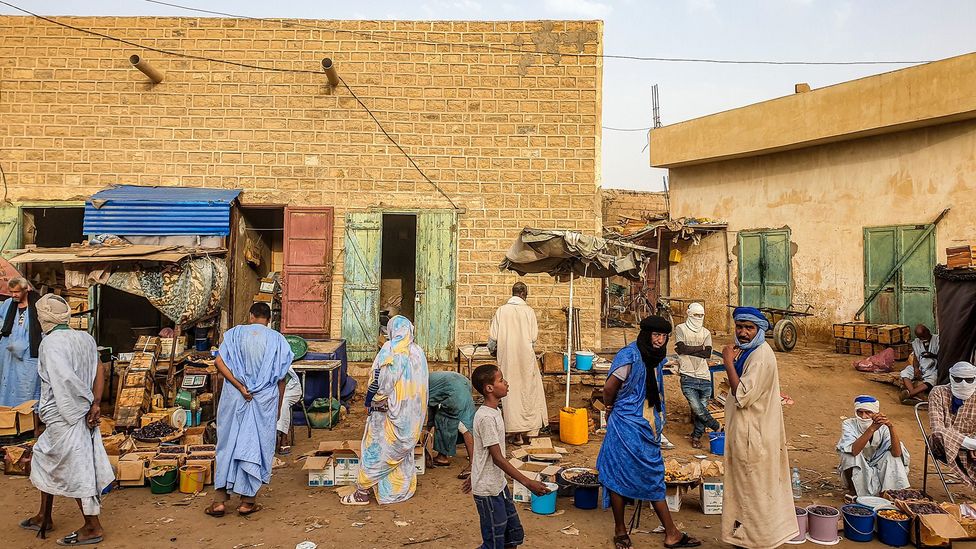 A new standard in blue

In recent decades, with the arrival of chemical dyes from Asia and Europe and low-cost dyeing techniques such as bale dyeing (an easy process in which the fabrics are put through a cold-water bath), a variety of blue shades became possible. And with the rise of the middle class in Mauritanian towns and cities, people have been increasingly choosing light blue daraas for their similarity to traditional white daraas and the social status they symbolise.

“A light blue daraa looks like the white one, but it only needs to be cleaned every three to four days,” said Jdeidou. 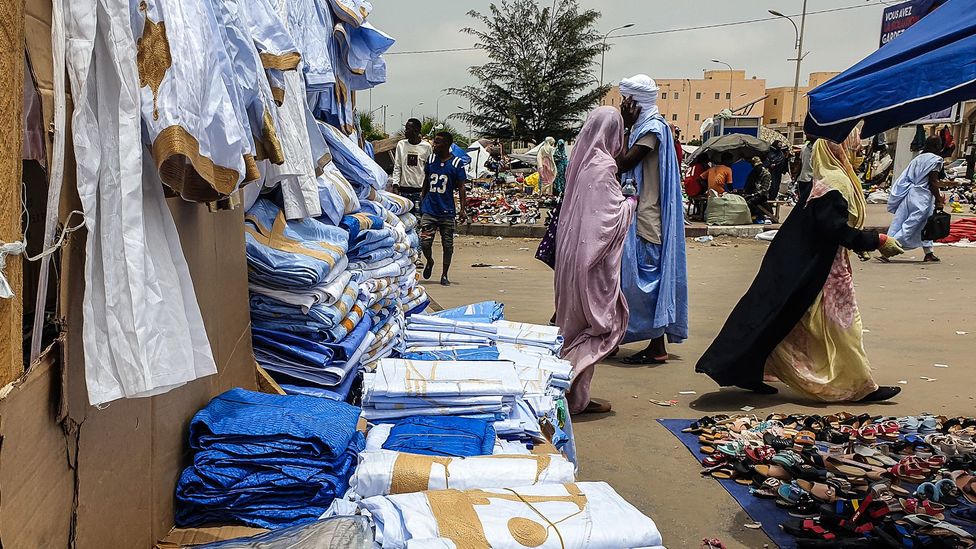 Many blue items are for sale in Nouakchott’s central market (Credit: Juan Martinez)

A world coloured in blue

The central market in Mauritania’s capital, Nouakchott, is truly a blue world. Many sellers offer only blue clothing, and at least one out of every four men wears some shade of a blue daraa. In Mauritania the blue colour extends beyond clothing, and can be found in blankets and stall umbrellas, but also in architectural elements such as doors, ceilings and fences.

Although the colour blue represents the sky and divinity in the Quran, local Mauritanians have a more practical reason to use it: it’s the perfect colour for protection from the sun. 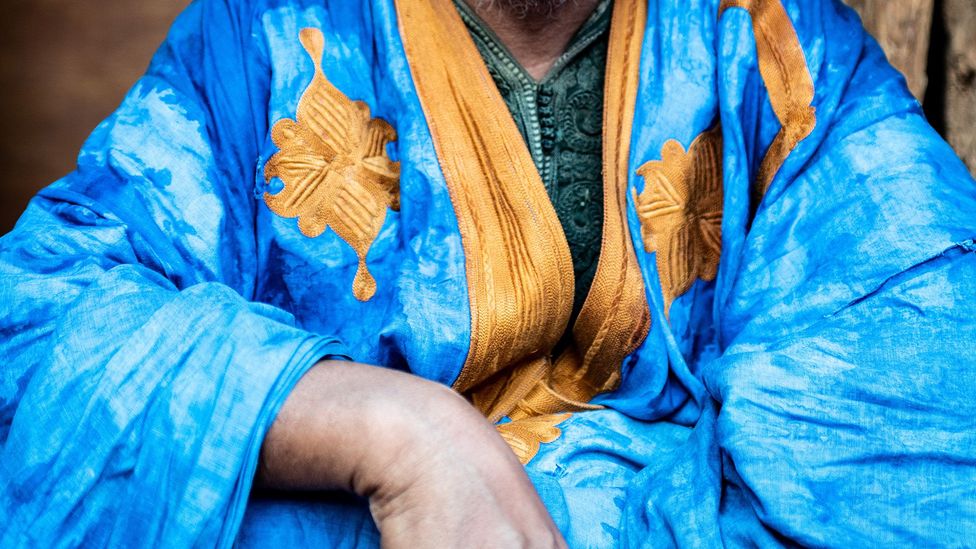 Many daraas in Mauritania are embellished with gold and white embroidery (Credit: Juan Martinez)

The very first daraas were made of silk, but were later considered to be haram, an Arabic term meaning “forbidden” under Muslim law. Today, at shops in Nouakchott, it’s common to see daraas made from polyester, muslin and the wool of camels and goats, in addition to silk versions for non-Muslims. Many daraas in Mauritania are also embellished with gold and white embroidery, and some even have several internal and external pockets – details that would have been rare centuries ago but are useful in today’s modern, urban world.

There have been attempts to introduce more Western clothing in Mauritania, however, most have failed. According to Hademine Ahmedou, a local guide from the town of Zouérat, teachers there were once told to avoid wearing a daraa while working and to start adopting the smart dress culture from Europe or North America. Nevertheless, many Mauritanians couldn’t bear to leave their traditional daraa and its cultural importance behind. 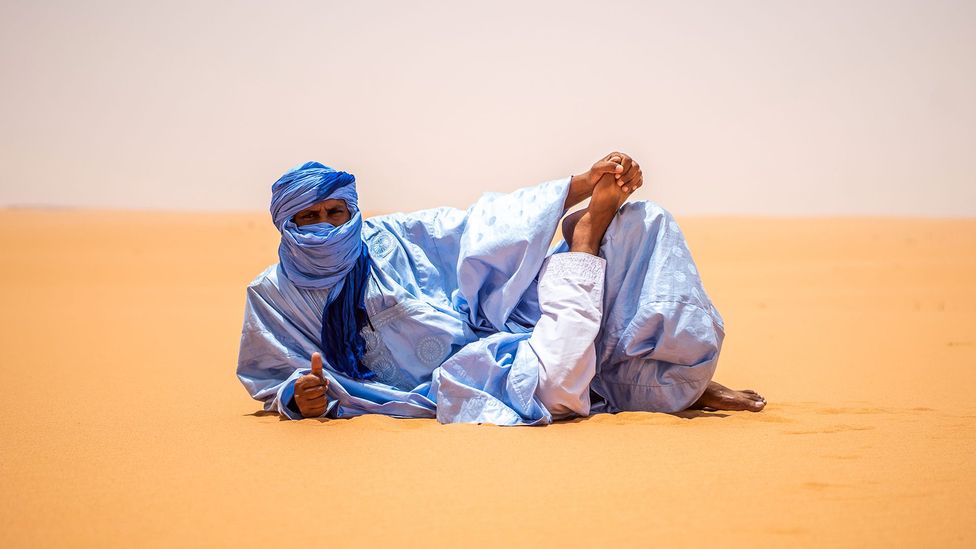 Proud of their nomad heritage

While elements of the traditional attire have been lost in most cities across the Sahara, men proudly wear their blue daraas in Nouakchott. They have become such an integral part of Mauritanian culture that even businessmen dressed in smart suits wear a custom daraa instead of a blazer.

“It is comfortable, easy to clean and looks good”, said Jdeidou (pictured) with a smile. 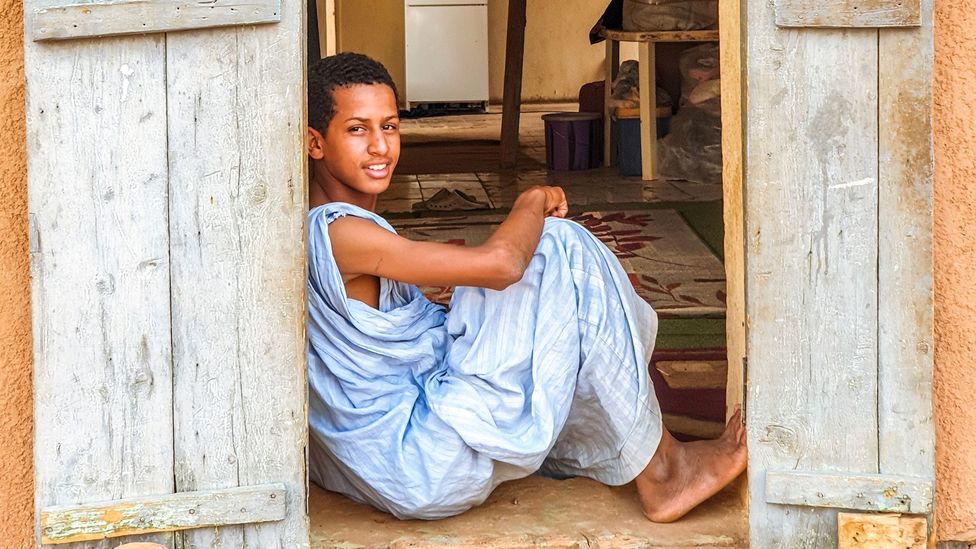 A trend for generations to come

While most Saharan countries now look to the West for fashion trends, in Mauritania, change seems a long way off. The younger generations are also proud of their traditions and regularly wear daraas.

There are also hints of the clothing appearing in the modern fashion world. Recently, versions of Saharan tagelmusts have inspired trendy scarves in Europe. And this year, luxury Italian fashion house Valentino drew inspiration from the traditional Saharan daraa in designing its spring/summer 2021 collection.

As more and more cultural traditions are becoming endangered in today’s fast-paced, ever-changing world, the blue daraa and tagelmusts – and the long-held traditions they represent – still continue to shine from the Sahara to the rest of the world.