Pulasan (Nephelium mutabile) is a tropical fruit closely related to the rambutan, in the family Sapindaceae, native to Peninsular Malaysia. The name pulasan is derived from Malay word ‘pulas’ meaning twist, in referrence to the act of opening the fruit via twisting. It is known as pulasan in English, Spanish and Malay, kepulasan in Indonesia, bulala in the Philippines, and ngoh-khonsan in Thailand. Pulasan is common in Southeast Asia and the Philippines, and rare to the rest of the world. 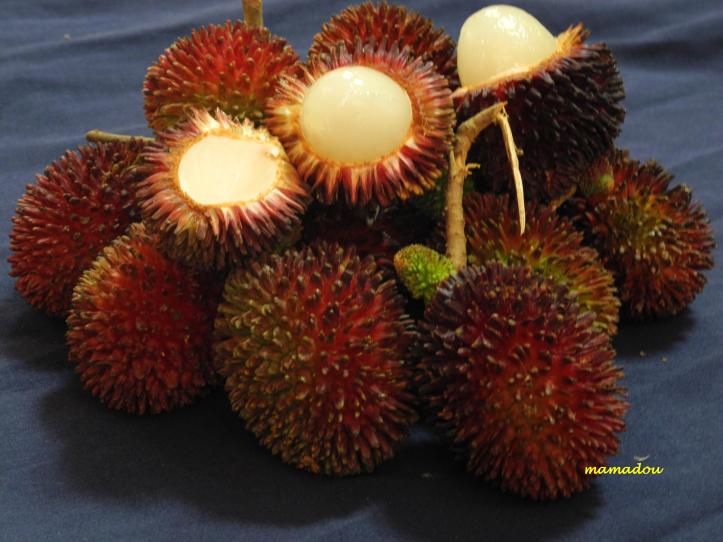 Pulasan tree is a tropical ornamental tree, growing 10-15 m tall, with short trunk, 30-40 cm diameter. The branches are brown and hairy when young. The pinnate leaves are alternate, 17-45 cm long, with 2-5 pairs of opposite leaflets, oblong or elliptic-lanceolate, 6-17.5 cm long and 5 cm wide. The leaves are dark-green, slightly wavy on the upper side, and pale bluish-green with few hairs on the underside. The petaless flowers are small, greenish, with 4-5 hairy sepals, borne singly or in clusters, on erect, axillaries or terminal branches. The panicles are covered with fine yellowish or brownish hairs. The fruit is 5-7.5 cm long, ovoid, red or dark-red in color. The fruit is covered with short, stiff, fleshy straight spines, 1 cm long. 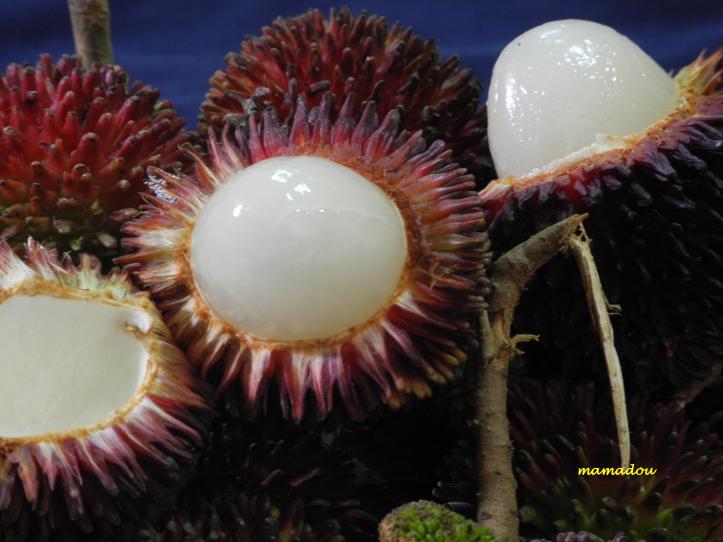 This ovoid dark red colour fruit has a thick, leathery rind closely set with narrowed, blunt tipped tubercles. The straight spines of the fruit grow up to 1 cm long. The oblong shaped seed appears to be flattened on one side with grayish brown in colour. On by twisting the fruit with both the hands, the fruit can be opened and the flesh can be consumed.

Pulasan is juicy and sweet, usually eaten fresh, though it resembles much like Rambutan, it is different from Rambutan and haves its own characteristics. Pulasan is sweeter than rambutan and lychee.  The wood is light red, harder and heavier than that of rambutan. The decotion of the fruit is highly used bathing fever patients. There are two varieties of Pulasan one is dark red and the other one is light red.

Pulasan is propagated by seeds which can be either male or female, but there are a number of named varieties propagated by grafting and air layering.  The seeds lose viability quickly, and should not be allowed to dry out. Germination occurs in 10-15 days. Seed propagation is not usually preferred, as the trees may be males or have fruit of inferior quality. Both bud and approach grafting are used. Grafted trees begin to produce fruit at about 3-5 years.

The most important related species is the rambutan (Nephelium lappaceum), but there are at least 30 other wild species of Nephelium with edible fruits.

The pulasan is primarily eaten fresh, but can also be used in jams and juices.